Upon reading Burke's discussion of the four features of Hitler's "unification device," Burke's analysis of Mein Kampf was, for me, at its most interesting (202). Hitler promoted anti-Semitism through notions of inborn dignity in the Aryan race; by projecting onto the Jewish population all of the problems Germany was facing, a projection "given a semblance of reason because the individual properly realizes that he is not alone responsible for his condition" (203); by a "symbolic change of lineage" (203); and by providing "a noneconomic interpretation of economic ills" that targeted "Jew finance," placing "Ayan finance" in a position to take control.
This differentiation between "Jew" and "Aryan" adequately severs one matter (finance) into two separate matters, automatically casting one in an undesirable light. "Aryan finance," as Hitler would have considered it, would in actuality simply have been "finance." Anything in connection to the "Jew" aspect of German affairs would function, then, as an unrecognizable, external other to which so-called insiders could not relate. Tacking adjectives of any kind onto a subject automatically disconnects the termed group from an overall whole.
Upon first reading this section of Rhetoric of Hitler's "Battle," this practiced seemed unfamiliar to me. After further reflection, I realize there is a much-discussed matter in America today that takes on this very type of differentiation. To illustrate, I'd like to share a quote a friend from Sweden sent me just after Friday's class: 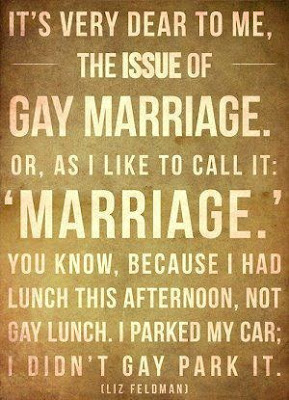 The concern that marriage may be spoiled by the introduction of "gay" marriage is closely aligned to Hitler's interpretation of Germany's economic problems stemming from "Jew finance" in finance. A discussion about finance can disguise a discussion of Jews, and purposely set a certain group away from the rest. At present the debate of "gay marriage" is doing the same thing with the LGBT community. However, this is hardly a surefire tactic: unlike the case of Nazi Germany, differentiation has not successfully unified people who identify as not-LGBT.
Posted by Vanessa Torline at 2:46 PM